Bullying and cyberbullying: how to tackle and prevent it

Bullying, a phenomenon so common in today's society, is also gaining ground among children, especially as the frequency of using technology that encourages online activity turns bullying into cyberbullying.

How can we prevent and take action against bullying? Find out in the following lines what the theoretical background is, what the studies say and what the experts in the field recommend.

In the American Psychological Association Dictionary (APA Dictionary), bullying is defined as threatening and aggressive behavior that is persistent or may take the form of verbal abuse directed at other people in another vulnerable situation.

It also refers to cyberbullying, which is also bullying but located in an online environment, cyberbullying or threatening behavior via electronic technology such as mobile phones, emails, and text messages.

SURVEY: 6 out of 10 children aged 2 to 14 were physically bullied through physical punishment between 2005-2013

UNICEF data from nationally representative surveys conducted in 56 countries between 2005-2013 show that around 6 out of 10 children aged 2 to 14 have been physically bullied through corporal punishment. On average, 17% of children have experienced severe physical punishment.

We can speak of the existence of several types of bullying, which makes it easier to recognize and categorize it. Here are the typology of this phenomenon and some examples we have seen, which can help us to explain it to children.

Physical bullying or physical harassment is perhaps one of the most obvious forms. It comes in the form of blows to the victim. Whether it is punching, slapping, pushing, or breaking and damaging material goods, these are signs of physical bullying. We can also speak of a form of verbal bullying, which starts with teasing, followed by harsh and denigrating remarks about the victim. Over time, this type of bullying can lead to emotional abuse and impact mental health.

Last but not least, a new form of bullying that has emerged as a result of technological developments is cyberbullying. The internet has given malicious people the opportunity to interact quickly and easily with other people, turning them into victims. More than 59% of teenagers experience online attacks. However, they are not the only ones targeted when it comes to this type of bullying. Mean comments on social media or threatening messages are just two examples of cyberbullying experienced even by adults. 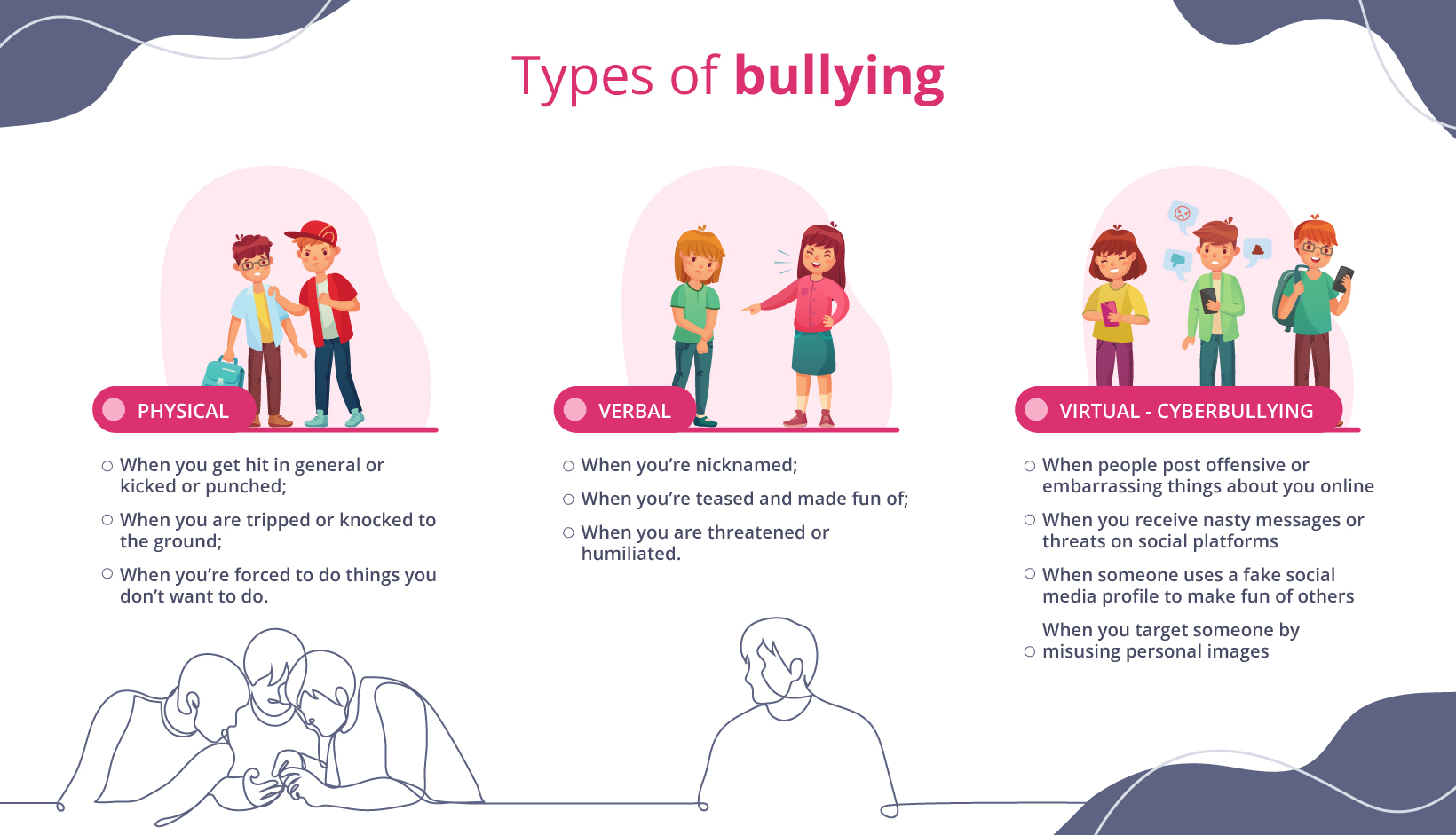 Cyberbullying is the intentional use of information by an individual or group to harass/threaten/intimidate one or more individuals online or using technological means. Attacks can vary in form ("body shaming", "hate speech", "professional sabotage" appealing to the sexual appearance and integrity of the individual, threats of sexual violence, and "cyberstalking"), but the main purpose is to highlight a power imbalance between the aggressor and the victim.

Cyberbullying is recognized as a serious threat not only to people's physical health but also to their emotional well-being. Despite awareness of this serious challenge, it seems that the problem continues to grow unless a conscious effort is made to stop it and the relevant authorities are involved.

It is important that we, as adults, inform ourselves correctly so that we can direct the child towards appropriate behavior that does not encourage the development of the phenomenon in any situation, whether we are talking about the child as a bystander, aggressor, or victim.

The folks at Save the Children, help us to see what we can do as parents when we observe or suspect bullying behavior, is an open discussion with the child, whether victim, bully, or bystander. Some questions you can ask to start a discussion are:

UNICEF talks about the importance of preventing of these phenomena and shows us 8 steps that can help us manage these situations with children.

Regardless of the type of bullying, adults, whether teachers or parents, need to take action. Children, whether they are bullies, victims, or just witnesses, may not realize at an early age the impact this phenomenon can have. It is essential to be alert to any warning signals, to investigate and act to manage and reduce bullying.

Mathematics: How do we help children see beyond numbers?